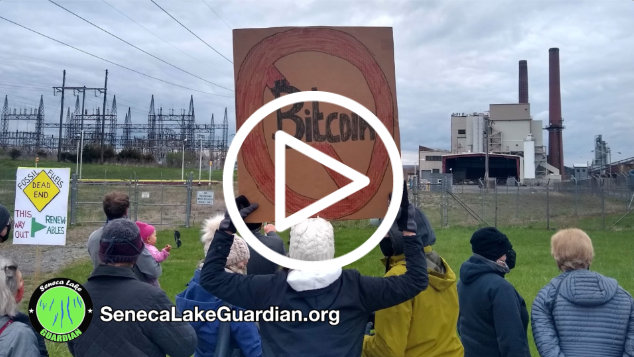 Greenidge is an old coal power plant with an already bad environmental history. Once mothballed, it was converted to a gas fired plant for use as a “peaker plant”- to only be used when excess energy was needed by the public, and not run continually. Now, its out of state owners at Atlas Holdings want to expand operations for a privately owned bitcoin operation which would consume enough power to fuel 93,000 homes. That’s bigger than 2 of Amazon’s immense data centers. This facility threatens the health of our air, our water, and the Finger Lakes’ thriving agricultural and tourism-driven economy.

But Greenidge is not an outlier. Proof of Work (PoW) cryptocurrency mining is extremely energy intensive. It can use the same amount of energy as entire countries like Argentina.

Parts of China and India are banning Bitcoin because it is hampering their climate goals, and taking power (electricity) away from the public to use for private Bitcoin operations. Crypto mining’s energy use has increased by 320% in the past 5 years. Nature completed a study in 2018 stating that Bitcoin mining could single-handedly tip us over that 2 degree tipping point that climate scientists warn about.

Energy-intensive, climate busting crypto mining is sweeping through the US as more countries move to ban it. New York is host to nearly 20% of all crypto mining where there is no regulation on this polluting industry.

Seneca Lake Guardian has lead the charge in educating and informing statewide environmental organizations who have formed a coalition to make this a top environmental priority for New York. We’re laser-focused on this issue and our relatively small sized organization lends itself to being nimble enough to act rapidly, when other larger environmental orgs cannot. Seneca Lake Guardian continues to connect with impacted communities across the US and seeks to inform regulations that would prevent this industry from derailing our critical climate goals.

In 2021, New York State residents overwhelmingly voted for and passed the Prop 2 amendment to the state constitution which gives every New Yorker a right to clean water, clean air, and a healthful environment.